Home > Cultural > A Glimpse of Bhutan 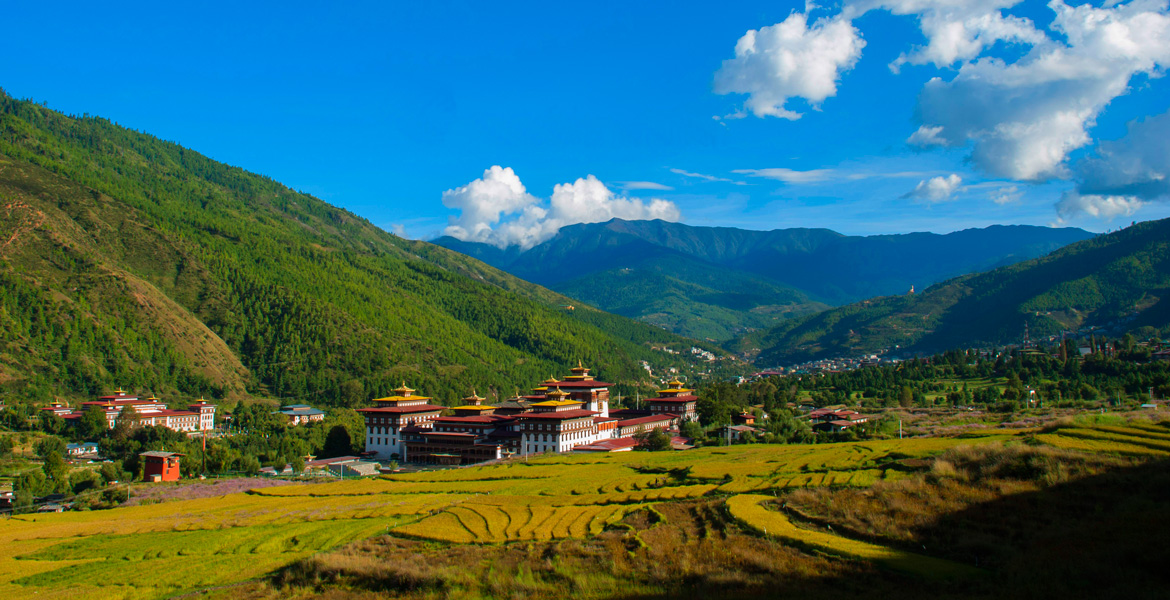 A Glimpse of Bhutan is an ideal way to experience the glory and the myth of this Himalayan Kingdom at its most magnificent, a perfect blend of culture and nature exploration. It gives you a chance to meet people, enjoy the pristine forest with rare glimpse of wildlife and observe the ancient old traditions of arts and crafts while traveling through the less frequented areas of Bhutan.

National Memorial Chorten[1 hrs] – Meet the elderly generation in circumambulation at the National Memorial Chorten. Chorten literally means ‘Seat of Faith’ and Buddhists often call such monuments, the ‘Mind of Buddha’. Treat yourself with fantastic depiction of Buddhist teachings in form of paintings and sculptures at this temple.

Buddha Point [1 hrs] – Located at Kuensel Phodrang, the 169 feet bronze statue of Buddha Dordenma, Vajra Throne Buddha symbolising indestructibility will be completed soon. The Buddha statue itself is competed awaiting paintings, but visitors can drive up to the Buddha point and view the tallest statue of Lord Buddha. The view of Thimphu valley from the Buddha point is pectacular and beautiful, especially at night.

Takin Enclosure [1 hrs] – On the way to the viewpoint over Thimphu is the home of Bhutan’s national animal, the Takin, a strange looking beast some say looks like a beestung moose.

Centenary Farmers’ Market [1.5 hrs] – Every Saturday and Sunday most of the Thimphu population congregate on the banks of the river where the weekend market is held. Here villagers from the valley and other nearby places come to sell their wide range of agriculture products. A visit to the market provides great photo opportunities, as well as the chance to mingle with local people and perhaps buy souvenirs.

Tashichho dzong (Thimphu Dzong) [1 hrs] – The “fortress of the glorious religion” was initially constructed in 1641 and restored by the Third King Jigme Dorji Wangchuck in the 1960s. Tashichho dzong houses some ministries, His Majesty’s secretariat, and the central monk body. (5 – 6 pm Mon – Fri, 8 am – 6 pm Sat & Sun, to 5 pm in winter)

The beautiful valley of Paro is home to many of Bhutan’s old monasteries and temples. The country’s only Airport is in Paro. The valley is also home to mount Jomolhari (7,300 meters) situated at the northern end of the valley whose glacier water forms the Pachu flowing through the valley.

Paro Dzong (aka Ringpung Dzong) [2 hrs] –Explore the Rinpung Dzong which the locals call the ‘fortress of a heap of jewels’. Built in 1646 by Zhabdrung Ngawang Namgyal, the dzong stands on a hill above Paro Township. It is linked by the traditional cantilever bridge (called the Nemi Zam) over the Pa chu where one may pose a photograph. Experience a walk up a paved stone path running alongside the imposing outer walls. Once inside the Dzong, you will be welcomed by the monks, architecture and the ancient frescoes.

National Museum (Paro Ta Dzong) [1 hrs] – On a ridge immediately above Rinpung Dzong is Ta Dzong, originally built as a watchtower. In 1968, Ta Dzong was inaugurated as the first National Museum, and now holds a fascinating collection of art, relics, religious thangkha paintings, Bhutan’s exquisite postage stamps, coins and handicrafts, together with a small natural History collection. Start or end your trip with a visit to this marvelous museum.

Kyichu Lhakhang[1 hrs] – Also known as Kyerchu Temple or LhoKyerchu, is the oldest temple in Bhutan. Just like Jambhay Lhakhang in Bumthang, it is one of the 108 temples built by the Tibetan King Songtsen Gampo to subdue and pin down an ogress that was obstructing the spread of Buddhism.

According to legend, all 108 temples were built in a single night. Go back in time and history and visit the 7th century Kyichhu temple. As the name suggests, the temple is a reservoir of peace, where you will really feel at peace here. Next to the temple is the house that is now turned into a museum dedicated to the late Dilgo Khyentse Rinpoche. One can come across photographs and other artifacts belonging to Rinpoche.

Paro Town [2 hrs] – After a day of hiking, perhaps its to explore the main street of Paro town and check out if there’s anything

Are you ready? We will be making the hike up to one of the key highlights in Bhutan today! Tiger’s Nest aka Taktsang Monastery

A prominent Himalayan Buddhist sacred site and temple complex located on the cliff side of Paro Valley. According to legends, it is believed that Guru Rinpochhe flew to this location from Tibet on the back of a Tigress (his consort Yeshey Tshogyal) and meditated in one of the caves. Guru Rinpochhe performed meditation and emerged in eight manifestations and the place became holy. Thus gaining the name Tiger’s Nest.