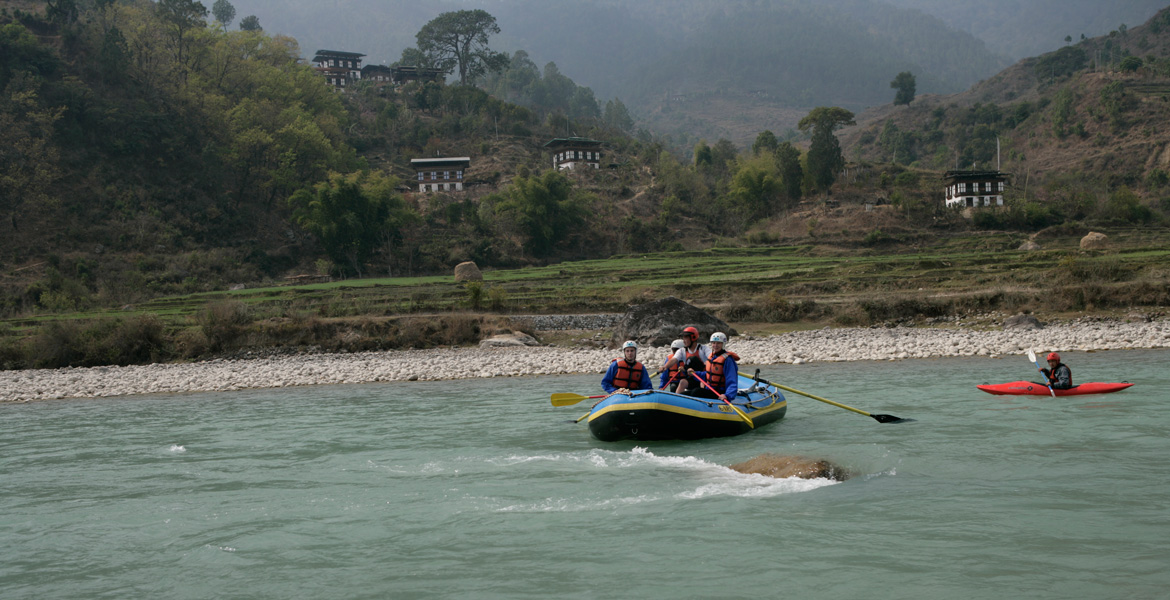 The crystal clear rivers of Bhutan are one of the kingdom’s best kept open secrets. Fed by the glacial-melt of the Eastern Himalayas, six major rivers (Wang Chhu, Sunkosh, Puna Tsang Chhu, Mangde Chhu, Kuri Chhu and Dangme Chhu and their tributaries), have been scouted for kayaking and rafting.

They cut through high valleys and low plains to meet up with the Brahmaputra River in India. The pristine natural setting and the sheer variety of the rivers’ courses provides a unique opportunity to explore Bhutan’s beautiful wilderness. Adventurous travelers will not be disappointed by the rugged, untamed waterways of Bhutan.  The rivers are plentiful with strong currents varying between slow, gentle flows in some places and powerful, raging torrents can be found throughout the country. Although adventure sports and tourism are relatively recent introductions to Bhutan, they are rapidly gaining in popularity.

The river courses available in Bhutan offer something for all visitors, regardless of experience: There are easy routes for beginners and hair-raising runs for the veterans. Besides the rafts and the kayaks, Bhutanese agents also organize walking and trekking expeditions along the scenic river banks. The best time for rafting and kayaking is from March to April and November to December.

Bhutanese rafting and kayaking guides are well trained and will do everything to ensure that you enjoy the adventure while minimizing the risks. The rivers of Bhutan were first surveyed for potential routes for water sports in 1997 by Gerry Mofatt and Peter Knowles, both experienced rafters/kayakers at the invitation of the Royal Government and the Department of Tourism.

They trained the first batch of Bhutanese river-guides and conducted surveys to grade the rivers. Since then, other rivers have been surveyed including the Punatsang Chhu, Manas and Amo Chhu. TCB guidelines ensure that all operators use well maintained professional equipment and maintain a reasonable guide-client ratio.