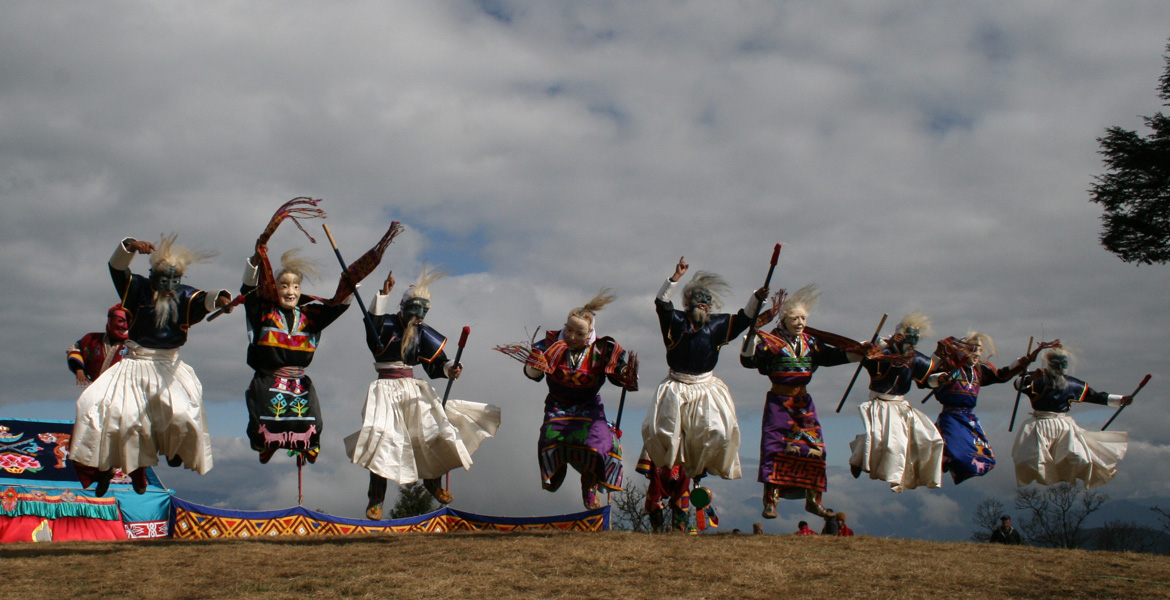 The Dochula Druk Wangyel Festival was established in 2011 in commemoration of His Majesty the Fourth Druk Gyalpo and the Armed Forces’ victory over Indian insurgent forces residing in southern Bhutan in 2003.

Druk Wangyel Festival is an annual festival held on December 13th at the Druk Wangyal Lhakhang Festival Ground located at Dochula Pass around 22km from the capital city Thimphu. Dochula Pass is one of the most scenic locations in the entire kingdom, offering a stunning panoramic view of the Himalayan mountain range. Set amidst this breathtaking backdrop, the Dochula Druk Wangyal Tsehchu is an experience unlike any other and truely exemplifies Bhutanese cultural traditions.

The Druk Wangyal Lhakhang was built over a period of four years (2004-2008) under the vision and patronage of Her Majesty the Queen Mother Ashi Dorji Wangmo. The Lhakhang honors the courageous service of the Fourth King, who personally led the troops against the insurgents, as well as the regular Armed Forces of the country

Buddha Point – Located at Kuensel Phodrang, the 169 feet bronze statue of Buddha Dordenma, Vajra Throne Buddha symbolising indestructibility will be completed soon. The Buddha statue itself is competed awaiting paintings, but visitors can drive up to the Buddha point and view the tallest statue of Lord Buddha. The view of Thimphu valley from the Buddha point is pectacular and beautiful, especially at night.

Institute of Zorig Chusum – Commonly known as the Painting School, or the School of the Thirteen Arts, the Institute offers you a glimpse of novices learning 13 traditional arts and crafts of Bhutan. It is a hands-on trip for you. Enjoy few moments with future artists of the country. Mon – Fri, 09.00 – 15.30, Sat, 09.00 – 12.00

Tashichhodzong (Thimphu Dzong) – The “fortress of the glorious religion” was initially constructed in 1641 and restored by the Third King Jigme Dorji Wangchuck in the 1960s. Tashichhodzong houses some ministries, His Majesty’s secretariat, and the central monk body. (5 – 6 pm Mon – Fri, 8 am – 6 pm Sat & Sun, to 5 pm in winter)

We will set off early from Thimphu after breakfast, perhaps with a visit to the weekend market first. Then proceed to Punakha, the ancient capital of Bhutan, about 2 1/2 hours drive from Thimphu across Dochu-la pass. Once you cross the pass, you wind down into a warm fertile valley and meander along a gently flowing aquamarine river that leads you to the Punakha Dzong, the second dzong to be built in Bhutan.

Dochula Pass – at 3,050m, this beautiful pass with its 108 Bhutanese stupas was built by Her Majestythe Queen Mother Ashi Dorji Wangmo Wangchuck to commemorate victory over the Indian militants and to liberate the souls of the lives lost.

The Dochula Druk Wangyel Festival was established in 2011 in commemoration of His Majesty the Fourth Druk Gyalpo and the Armed Forces’ victory over Indian insurgent forces residing in southern Bhutan in 2003.

Druk Wangyel Festival is an annual festival held on December 13th at the Druk Wangyal Lhakhang Festival Ground located at Dochula Pass around 22km from the capital city Thimphu. Dochula Pass is one of the most scenic locations in the entire kingdom, offering a stunning panoramic view of the Himalayan mountain range. Set amidst this breathtaking backdrop, the Dochula Druk Wangyal Tsehchu is an experience unlike any other and truely exemplifies Bhutanese cultural traditions.

The Druk Wangyal Lhakhang was built over a period of four years (2004-2008) under the vision and patronage of Her Majesty the Queen Mother Ashi Dorji Wangmo. The Lhakhang honors the courageous service of the Fourth King, who personally led the troops against the insurgents, as well as the regular Armed Forces of the country

Punakha Dzong – Placed strategically at the junction of the Pho Chu and Mo Chu rivers, the dzong was built in 1637 by Zhabdrung Ngawang Namgyal to serve as the religious and administrative seat of the region. It was here that the dual system of government was introduced in the 17th century and in 1907, enthroned the first King Gongsar Ugyen Wangchuck. Damaged over the centuries by four catastrophic fires and an earthquake, the dzong has been fully restored in the recent years by the 4th King Jigme Singye Wangchuck.

At the dzong enrich your trip with the opportunity to see the highest standards in woodwork. Do not miss the massive Kuenray, the Coronation Hall of all Bhutanese kings,the Dzongchung at the entrance to the dzong and the cantilever bridge over the Mochu that has been recently renovated.

Paro Dzong (aka Ringpung Dzong) – Explore the Rinpung Dzong which the locals call the ‘fortress of a heap of jewels’. Built in 1646 by Zhabdrung Ngawang Namgyal, the dzong stands on a hill above Paro Township. It is linked by the traditional cantilever bridge (called the Nemi Zam) over the Pa chu where one may pose a photograph. Experience a walk up a paved stone path running alongside the imposing outer walls. Once inside the Dzong, you will be welcomed by the monks, architecture and the ancient frescoes.

National Museum (Paro Ta Dzong) – On a ridge immediately above Rinpung Dzong is Ta Dzong, originally built as a watchtower. In 1968, Ta Dzong was inaugurated as the first National Museum, and now holds a fascinating collection of art, relics, religious thangkha paintings, Bhutan’s exquisite postage stamps, coins and handicrafts, together with a small natural History collection. Start or end your trip with a visit to this marvelous museum.

Clinging precariously to a granite cliff 800 metres above the Paro Valley is Taktsang Monastery “Tiger’s Nest”. The breath-taking scenery is definitely worth the challenging climb up to the viewpoint. Evening, enjoy dinnerwith Bhutan performance.

A prominent Himalayan Buddhist sacred site and temple complex locatedon the cliff side of Paro Valley. According to legends, it is believed that Guru Rinpochhe flew to this location from Tibet on the back of a Tigress (his consort Yeshey Tshogyal) and meditated in one of the caves. Guru Rinpochhe performed meditation and emerged in eight manifestations and the place became holy. Thus gaining the name Tiger’s Nest.

Kyichu Lhakhang  – Also known as Kyerchu Temple or Lho Kyerchu, is the oldest temple in Bhutan. Just like Jambhay Lhakhang in Bumthang, it is one of the 108 temples built by the Tibetan King Songtsen Gampo to subdue and pin down an ogress that was obstructing the spread of Buddhism.

According to legend, all 108 temples were built in a single night. Go back in time and history and visit the 7th century Kyichhu temple. As the name suggests, the temple is a reservoir of peace, where you will really feel at peace here.