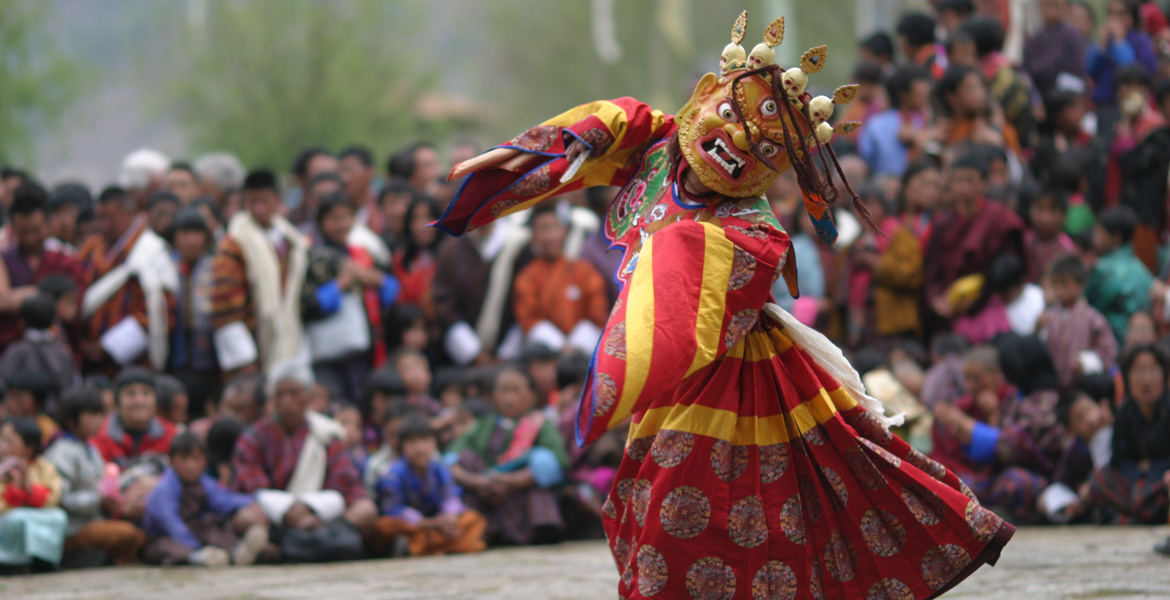 The Paro Tshechu is held every spring and is one of the most colorful and significant events in Paro Dzongkhag (district).

The Tsehchu is considered a major attraction and people travel from neighboring districts to participate in the festivity. Early in the morning on the last day of the celebration the monks display a gigantic thangkha (embroidered painting) , the Guru Throngdel, inside the dzong. Thongdrols are especially impressive examples of Buddhist art and never fail to amaze viewers. They are considered so sacred that simply seeing a Thongdrol is said to cleanse the viewer of sin.

Tashichhodzong (ThimphuDzong) – The “fortress of the glorious religion” was initially constructed in 1641 and restored by the Third King JigmeDorjiWangchuck in the 1960s. Tashichhodzong houses some ministries, His Majesty’s secretariat, and the central monk body. (5 – 6 pm Mon – Fri, 8 am – 6 pm Sat & Sun, to 5 pm in winter)

Visit the Archery Ground – The national sport of Bhutan. Archery in Bhutan is culturally distinctive people from different social strata find archery one of the most enjoyable sports, being both fun and physical exercise. Archery in Bhutan is a way of socialization, communication, and development of relations between people. Emotions run high during competitions, and support for archers and ridicule or distraction of opponents can become as violent as in other countries’ sporting events.

Situated at an altitude of 2400m, Thimphu is the centre of government, religion and commerce. The capital has an interesting combination of tradition and modernity, and includes some of the most advanced and remotest parts of the kingdom. It is home to the Kings and the Royal family members, civil servants, expatriates, politicians, business persons and monks. Enjoy this cultural mix based on livelihood. Of culture we will take you through temples, dzongs, chortens, museums, handicraft stores, nunneries, parks and many more. Allow yourself to meet both traditional and contemporary artist.

Buddha Point – Located at KuenselPhodrang, the 169 feet bronze statue of Buddha Dordenma, Vajra Throne Buddha symbolising indestructibility will be completed soon. The Buddha statue itself is competed awaiting paintings, but visitors can drive up to the Buddha point and view the tallest statue of Lord Buddha. The view of Thimphu valley from the Buddha point is pectacular and beautiful, especially at night.

Institute of ZorigChusum – Commonly known as the Painting School, or the School of the Thirteen Arts, the Institute offers you a glimpse of novices learning 13 traditional arts and crafts of Bhutan. It is a hands-on trip for you. Enjoy few moments with future artists of the country. Mon – Fri, 09.00 – 15.30, Sat, 09.00 – 12.00

We will set off early from Thimphu after breakfast, perhaps with a visit to the weekend market first. Then proceed to Punakha, the ancient capital of Bhutan, about 2 1/2 hours drive from Thimphu across Dochu-la pass. Once you cross the pass, you wind down into a warm fertile valley and meander along a gently flowing aquamarine river that leads you to the PunakhaDzong, the second dzong to be built in Bhutan.

Dochula Pass – at 3,050m, this beautiful pass with its 108 Bhutanese stupas was built by Her Majesty the Queen Mother AshiDorjiWangmoWangchuck to commemorate victory over the Indian militants and to liberate the souls of the lives lost.

Chhimi Lhakhang– The divine madman also known, as Drukpa Kinley is a famous teacher with whom the phallic symbol is associated. Tales told by your guide would have excited you to visit ChhimiLhakhang. The Divine Madman sits there though a statue this time. Do not miss the master’s deeds painted on the walls. Japanese and several American couples visited this temple and were blessed miraculously with children. Ask yourself, do I need this Fertility Tour or not?

Punakha Dzong – Placed strategically at the junction of the Pho Chu and Mo Chu rivers, the dzong was built in 1637 by ZhabdrungNgawangNamgyal to serve as the religious and administrative seat of the region. It was here that the dual system of government was introduced in the 17th century and in 1907, enthroned the first King GongsarUgyenWangchuck. Damaged over the centuries by four catastrophic fires and an earthquake, the dzong has been fully restored in the recent years by the 4th King JigmeSingyeWangchuck.

At the dzong enrich your trip with the opportunity to see the highest standards in woodwork. Do not miss the massive Kuenray, the Coronation Hall of all Bhutanese kings, the Dzongchung at the entrance to the dzong and the cantilever bridge over the Mochu that has been recently renovated.

GangteyGoempa– Situated south of the road and east of WangduePhodrang, is GangteyGompa, an old monastery dating back to the 17th century. The largest Nyingma monastery in western Bhutan, it was founded in 1613 by Gyalse Pema Thinlay.

ParoDzong (aka RingpungDzong) – Explore the RinpungDzong which the locals call the ‘fortress of a heap of jewels’. Built in 1646 by ZhabdrungNgawangNamgyal, the dzong stands on a hill above Paro Township. It is linked by the traditional cantilever bridge (called the NemiZam) over the Pa chu where one may pose a photograph. Experience a walk up a paved stone path running alongside the imposing outer walls. Once inside the Dzong, you will be welcomed by the monks, architecture and the ancient frescoes.

National Museum (Paro Ta Dzong) – On a ridge immediately above RinpungDzong is Ta Dzong, originally built as a watchtower. In 1968, Ta Dzong was inaugurated as the first National Museum, and now holds a fascinating collection of art, relics, religious thangkha paintings, Bhutan’s exquisite postage stamps, coins and handicrafts, together with a small natural History collection. Start or end your trip with a visit to this marvelous museum.

Paro Tshechu is one of the most popular tshechu in Bhutan. People from all walks of life and valleys come to Paro to witness the festival. Tshechu festivals, honors Padmasambhawa, also known as Guru Rimpoche, the precious yogi and saint who is credited with having introduced Tantric Buddhism throughout the Himalayas.

The festival’s masked dances are performed by monks clad in colorful brocade attire and permeated by chants and reading of Buddhist scripts. The culmination of festival constitutes the unfolding of a huge cloth thangka, a sacred scroll, depicting Padmasmabhawa and imagery from Buddhist pantheon. The mere viewing of the thongdrel (thong-see drel-liberate) is said to cleanse the viewer of sins.

Clinging precariously to a granite cliff 800 metres above the Paro Valley is Taktsang Monastery “Tiger’s Nest”. The breath-taking scenery is definitely worth the challenging climb up to the viewpoint. Evening, enjoy dinner with Bhutan performance.

A prominent Himalayan Buddhist sacred site and temple complex located on the cliff side of Paro Valley. According to legends, it is believed that Guru Rinpochhe flew to this location from Tibet on the back of a Tigress (his consort YesheyTshogyal) and meditated in one of the caves. Guru Rinpochhe performed meditation and emerged in eight manifestations and the place became holy. Thus gaining the name Tiger’s Nest.

KyichuLhakhang – Also known as Kyerchu Temple or LhoKyerchu, is the oldest temple in Bhutan. Just like JambhayLhakhang in Bumthang, it is one of the 108 temples built by the Tibetan King SongtsenGampo to subdue and pin down an ogress that was obstructing the spread of Buddhism.

According to legend, all 108 temples were built in a single night. Go back in time and history and visit the 7th century Kyichhu temple. As the name suggests, the temple is a reservoir of peace, where you will really feel at peace here. Next to the temple is the house that is now turned into a museum dedicated to the late DilgoKhyentse Rinpoche. One can come across photographs and other artifacts belonging to Rinpoche.

Today we will bid fond farewell to this beautiful Himalayan country. We hope by now you would have made some friends and also kept many photos and beautiful memories of Bhutan! And we look forward to seeing you again in this beautiful land of endless Enchantments! TashiDelek!