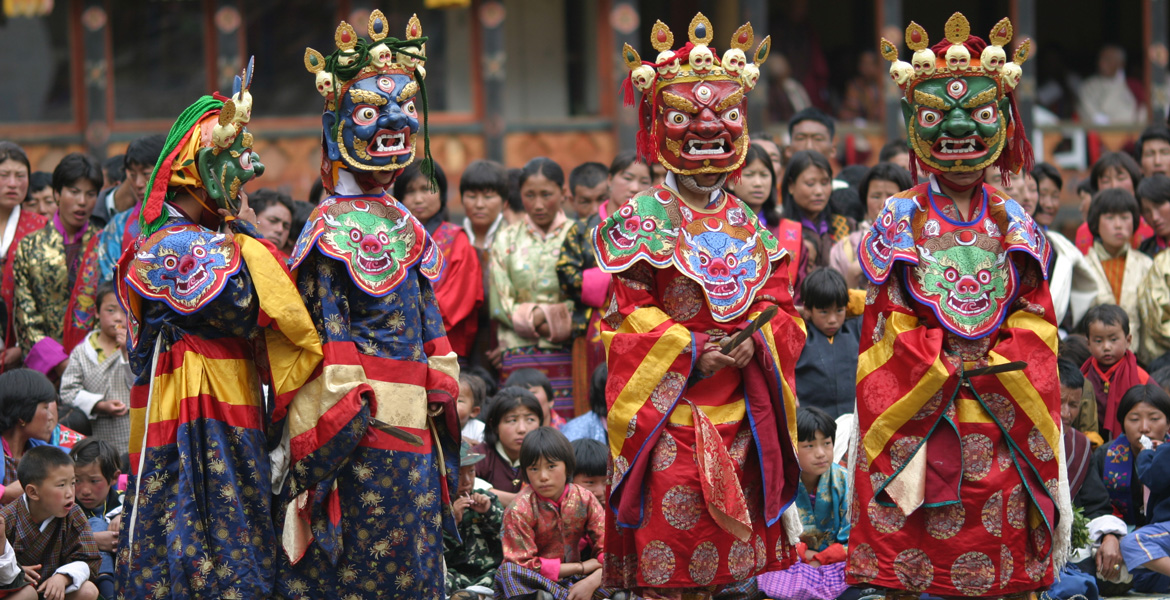 One of the biggest festivals in the country is the Thimphu Tshechu. This festival is held in the capital city for three days beginning on 10th day of the 8th month of lunar calendar. This Tshechu is witnessed by thousands of people many of which travel from neighboring Dzongkhags (districts) to attend the festivities. The actual Tshechu is preceded by days and nights of prayer and rituals to invoke the gods.

When it was initiated by the 4th Desi, Gyalse Tenzin Rabgay in 1867 the Tshechu consisted of only a few dances being performed strictly by monks. These were the Zhana chham and the Zhana Nga chham (Dances of the 21 Black Hats), Durdag (Dance of the Lords of the Cremation Ground), and the Tungam chham (Dance of the Terrifying Deities).

The Thimphu Tshechu underwent a change in the 1950s, when the third King Jigme Dorji Wangchuck, introduced numerous Boed chhams (mask dances performed by lay monks). These additions added colour and variation to the festival without compromising its spiritual significance. Mask dances like the Guru Tshengye (Eight Manifestations of Guru), Shaw Shachi (Dance of the Stags) are enjoyed because they are similar to stage-theater.

Equally important are the Atsaras, who are more than just mere clowns. The Atsaras are the dupthobs (acharyas), who provide protection. The dances and the jesting of the Atsaras are believed to entrance evil forces and prevent them from causing harm during Tshechus. Modern Atsaras also perform short skits to disseminate health and social awareness messages.

To farmers, the Tshechu is also seen as a break from farm life. It’s an occasion to celebrate, receive blessings and pray for health and happiness.

Besides the annual three day Tshechu, Thimphu also celebrates a one day festival known as the Thimphu Dromchoe. The day long festival dates back to the 17th century. It was first introduced by Kuenga Gyeltshen in 1710, who was recognized as the reincarnation of Jampel Dorji, son of Zhabdrung Nawang Namgyel. The dromchoe is celebrated 3 days prior to the Thimphu Tshechu.

The Dromchoe showcases the sacred dances dedicated to the chief protective deity of Bhutan, Palden Lhamo. Legend has it, that the deity Pelden Lhamo appeared before Kuenga Gyeltshen and performed the dances while he was in meditation. Based on these dances, Kuenga Gyaltshen initiated the Dromchoe.

Welcome to Bhutan, the Land of the Thunder Dragon. Touching down at Paro International Airport, you will be greeted by your guide upon exiting the arrival hall. Today, we will take it easy to acclimatize to the altitude. Drive to Thimphu, check in to the hotel and let’s have your first taste of Bhutanese cuisine.

Institute of ZorigChusum – Commonly known as the Painting School, or the School of the Thirteen Arts, the Institute offers you a glimpse of novices learning 13 traditional arts and crafts of Bhutan. It is a hands-on trip for you. Enjoy few moments with future artists of the country.
Day 2 – Thimphu Tshechu

Tashichho dzong (Thimphu Dzong) – The “fortress of the glorious religion” was initially constructed in 1641 and restored by the Third King Jigme Dorji Wangchuck in the 1960s. Tashichho dzong houses some ministries, His Majesty’s secretariat, and the central monk body.

The Thimphu Tshechu, as all Tshechu festivals, honors Padma Sambhawa, also known as Guru Rimpoche, the precious yogi and saint who is credited with having introduced Tantric Buddhism throughout the Himalayas. The festival’s masked dances are performed by monks clad in colorful brocade attire and permeated by chants and reading of Buddhist scripts. The culmination of festival constitutes the unfolding of a huge cloth thanka, a sacred scroll, depicting Padma Smabhawa and imagery from Buddhist pantheon.

Buddha Point – Located at Kuensel Phodrang, the 169 feet bronze statue of Buddha Dordenma, Vajra Throne Buddha symbolising indestructibility will be completed soon. The Buddha statue itself is competed awaiting paintings, but visitors can drive up to the Buddha point and view the tallest statue of Lord Buddha. The view of Thimphu valley from the Buddha point is spectacular and beautiful, especially at night.

Dochula Pass – The 108 chortens was built by the present Queen Mother of Bhutan Ashi Dorji Wangmo Wangchuck to commemorate Bhutan’s victory over Indian militants and to liberate the souls of the souls lost.

Punakha Dzong – Built in 1637, the dzong continues to be the winter home for the clergy, headed by the Chief Abbott, the Je Khenpo. It is a stunning example of Bhutanese architecture, sitting at the fork of two rivers, portraying the image of a medieval city from a distance. The dzong was destroyed by fire and glacial floods over the years but has been carefully restored and is, today, a fine example of Bhutanese craftsmanship.

Gangtey Goempa– Situated south of the road and east of Wangdue Phodrang, is Gangtey Gompa, an old monastery dating back to the 17th century. The largest Nyingma monastery in western Bhutan, it was founded in 1613 by Gyalse Pema Thinlay.

Nature Hike along the valley of Phobjikha– A short trek of about 90 minutes known as the ‘Gangte Nature Trail’ starts from the Mani stone wall to the north of the Gangteng Gonpa and ends in Khewa Lhakhang.

Black-Necked Crane Information Centre – The valley of Phobjikha is well known as the winter home of the Black necked crane (Grus Nigricollis). Bhutan is home to around six hundred black necked cranes with Phobjikha being one of the popular places that the birds migrate to in the winter months from the Tibetan plateau. The elegant and shy birds can be observed from early November to end of March.

Black-Necked Crane Information Centre, which has informative displays about the cranes and the valley environment. You can use the centre’s powerful spotting scopes and check what you see against its pamphlet ‘Field Guide to Crane Behavior’. If the weather’s iffy you can browse the library and handicraft shop, and watch videos at 10am and 3pm (Nu 200).

Remarks – For Gangtey, our first choice of Hotels is Dewachen, but due to Dewachen having only 18 rooms and a huge demand among tour operators sometimes we may not be able to host your stay at Dewachen.

In that case we shall either go back to Wangdue to spend the night there or we can arrange a home stay for you in Gangtey.

Paro Valley – The beautiful valley is home to many of Bhutan’s old monasteries and temples. The country’s only Airport is in Paro. The valley is also home to mount Jomolhari (7,300 meters) situated at the northern end of the valley whose glacier water forms the Pachu flowing through the valley. The following are some of the prominent places to visit in Paro.

Ta Dzong – Built as a watch tower the Ta Dzong, it was converted into the National Museum in 1968. The museum boasts antique Thangka, textiles, weapons and armour, household objects and rich assortment of natural and historic artifacts.

Paro Dzong also known as Rinpung Dzong, this 15th century massive fortress/monastery, is also the administrative center of the dzonkhag.

A prominent Himalayan Buddhist sacred site and temple complex located on the cliff side of Paro Valley. According to legends, it is believed that Guru Rinpochhe flew to this location from Tibet on the back of a Tigress (his consort Yeshey Tshogyal) and meditated in one of the caves. Guru Rinpochhe performed meditation and emerged in eight manifestations and the place became holy. Thus gaining the name Tiger’s Nest.

Kyichu Lhakhang [1 hrs] – Also known as Kyerchu Temple or LhoKyerchu, is the oldest temple in Bhutan. Just like Jambhay Lhakhang in Bumthang, it is one of the 108 temples built by the Tibetan King Songtsen Gampo to subdue and pin down an ogress that was obstructing the spread of Buddhism.

According to legend, all 108 temples were built in a single night. Go back in time and history and visit the 7th century Kyichhu temple. As the name suggests, the temple is a reservoir of peace, where you will really feel at peace here. Next to the temple is the house that is now turned into a museum dedicated to the late Dilgo Khyentse Rinpoche. One can come across photographs and other artifacts belonging to Rinpoche

Today we will bid fond farewell to this beautiful Himalayan country and take an early flight back to home. We hope by now you would have made some friends and also kept many photos and beautiful memories of Bhutan! And we look forward to seeing you again in this beautiful land of endless Enchantments! Tashi Delek!