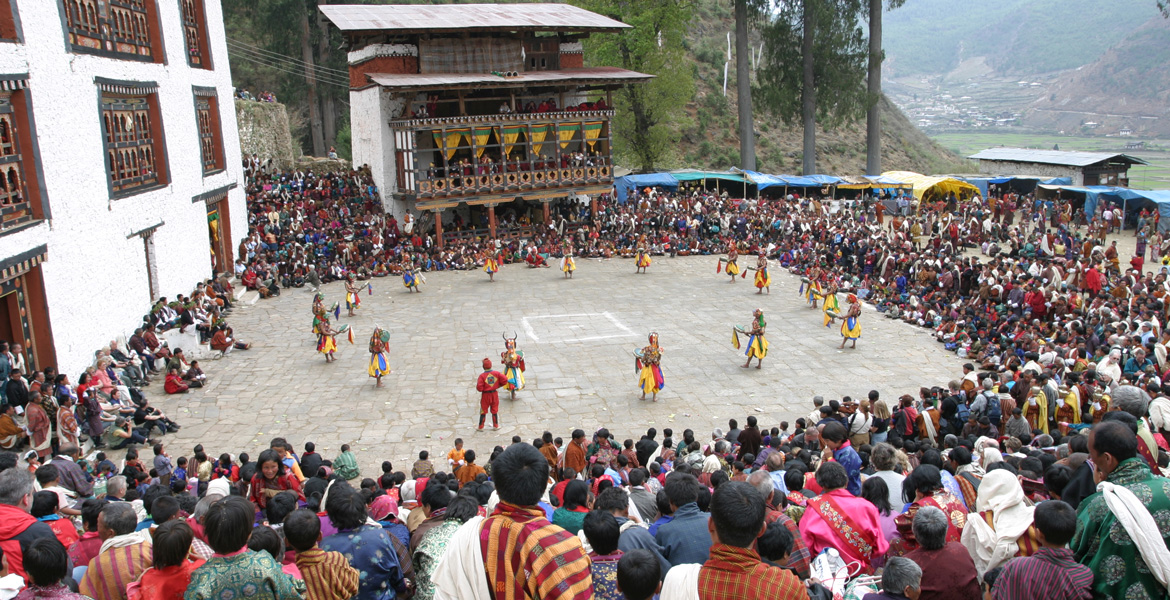 It is believed that Zhabdrung Jigme Drakpa would watch from his zimkhang window, when his gomchen (lay monk) and village women practised for the annual tshechu. In his last 39 appearances as a dancer in the annual tshechu, Lhendup, who became a mask dancer from 18, said not a single dance has been performed at the goenpa courtyard without being routed from the Gangsa Pang. Every year, two weeks before the annual Talo tshechu begins, a group of lay monks and elderly women would arrive at Gangsa Pang, offers the first  sacred offering and starts the practice of mask dances and folk songs.

Welcome to Bhutan, the Land of the Thunder Dragon. Touching down at Paro International Airport, you will be greeted by your guide upon exiting the arrival hall. Today, we will take it easy to acclimatise to the altitude. Drive to Thimphu, check in to the hotel and let’s have your first taste of Bhutanese cuisine and some light sightseeing in Thimphu if possible.
Textile Museum – Witnesses the art of traditional weaving.
Heritage Museum – Dedicated to connecting people to the Bhutanese rural past though exhibition of artefacts used in rural households.
Simtokha Dzong – Five miles from Thimphu, on a lofty ridge, stands Simtokha Dzong the oldest fortress in the Kingdom.

Dochula Pass – The 108 chortens was built by the present Queen Mother of Bhutan Ashi Dorji Wangmo Wangchuck to commemorate Bhutan’s victory over indian militants and to liberate the souls of the souls lost.

Punakha Dzong – Built in 1637, the dzong continues to be the winter home for the clergy, headed by the Chief Abbott, the Je Khenpo. It is a stunning example of Bhutanese architecture, sitting at the fork of two rivers, portraying the image of a medieval city from a distance. The dzong was destroyed by fire and glacial floods over the years but has been carefully restored and is, today, a fine example of Bhutanese craftsmanship.

Today is the last day of Talo Tshechu. The Thongdrel will be unfurled early in the morning and then the different mask dances and folk dances will take place. Talo valley itself is a very beautiful valley with lush green environment rich in both flora and fauna.

The three day Talo Tshechu is well known for its mask and Atsara dances, but an equally popular attraction which has a deep religious and historical significance is the Zhungdra by the Talo dance troupe. The Zhungdra performance particularly Mani Sum (3 songs) are very close to the heart of the Talops (people from Talo). This is because Mani Sum was composed by Meme Sonam Dhondup, the grandfather of Zhabdrung Jigme Chogyal (1862-1904), the 5th mind reincarnation of the first Zhabdrung (1594-1651).

The three songs of Mani Sum are performed at the closing item on each day of the three day of the tshechu. The three Songs, SamyiSala (performed on the first day), Drukpa Dungey (second day) and Thowachi Gangi Tselay on the final day.

Sami Sala was composed when the Talo Sanga Choeling dzong was built which was influenced by the Samyi Monastery in Tibet. Drukpa Dungey tells the story of the Zhabdrung Lineage and Thowachi Gangi Tselay is the thanks giving song.

Passing Wangdue (left), one of the major towns and district capital of Western Bhutan. Located south of Punakha, Wangdue is the last town before central Bhutan. The district is famous for its fine bamboo work and its slate and stone carving.

The valley of Phobjikha is well known as the winter home of the Black necked crane (Grus Nigricollis). Bhutan is home to around six hundred black-necked cranes with Phobjikha being one of the popular places that the birds migrate to in the winter months from the Tibetan plateau. The elegant and shy birds can be observed from early November to end of March. This is an old monastery that dates back to 17th century. Today we will do some short hikes around the valley of Phobjikha.

We will pay a visit to Chhimi Lhakhang – A 20 minutes walk across terraced fields through the village of Sopsokha from the roadside to the small temple located on a hillock in the centre of the valley below Metshina. NgawangChogyel built the temple in 15th century after the ’Divine Madman’ Drukpa Kuenlay built a small chorten there. It is a pilgrim site for couples wanting a child.

ThimphuDzong – The largest Dzong, is also the seat of the office of the King of Bhutan.

National Memorial Chorten which was built in honor of the late King JigmeDorjiWangchuk.

Today is the 2nd last day of the ParoTshechu. ParoTshechu is one of the most popular tshechu in Bhutan. People from all walks of life and valleys come to Paro to witness the festival. Tshechu festivals, honors Padmasambhawa, also known as Guru Rimpoche, the precious yogi and saint who is credited with having introduced Tantric Buddhism throughout the Himalayas. The festival’s masked dances are performed by monks clad in colorful brocade attire and permeated by chants and reading of Buddhist scripts. The culmination of festival constitutes the unfolding of a huge cloth thangka, a sacred scroll, depicting Padmasmabhawa and imagery from Buddhist pantheon. The mere viewing of the thongdrel (thong-see drel-liberate) is said to cleanse the viewer of sins.

Ta Dzong – Built as a watch tower the Ta Dzong, it was converted into the National Museum in 1968. The museum boasts antique Thangka, textiles, weapons and armour, household objects and rich assortment of natural and historic artifacts.

Drukgyal Dzong – A morning drive, north of Paro valley brings us to the ruins of DrukgyalDzong. Built in 1647 by the great ShabdrungNgawangNamgyal, father and unifier of medieval Bhutan, the Dzong was destroyed by an accidental fire and left in ruins as an evocative reminder of the great victories it was built to commemorate.Explore the ramparts and relive the memories of a glorious past.

Taktsang Monastery – A one hour hike to the cafeteria is also a vantage view whereby you can enjoy the stunning view of the monastery. Prayer flags adorn the cliffs and this is also where Guru Padmasambhava landed on the back of a tigress in the 8th century.

KyichuLhakhang – After a sumptuous local lunch, we will retrace our steps to visit KyichuLhakhang, one of the oldest temples in Bhutan.

Today we will bid fond farewell to this beautiful Himalayan country. We hope by now you would have made some friends and also kept many photos and beautiful memories of Bhutan! And we look forward to seeing you again in this beautiful land of endless Enchantments! TashiDelek!